I am still on 3G, so just be patient and I will add some (more) media to these three blog entries, eventually (probably Thursday night).

Today was AMAZING and quite possibly the best day I have ever had in Italy and the best day I have ever had as a history student! First, we went to Codroipo to an outdoor market and walked around. There were stalls for everything: clothes, shoes, scarves, plants, housewares, food, baskets, lingerie, toys, and everything in between. I bought some cookies for 60 cents and then we walked to my friend’s grandparent’s house, where her dad was waiting on us.

From Codroipo we went out to Villa Manin, which was the country estate of the last Doge of Venice, Ludovico Manin.

My friend’s dad also said that Napoleon Bonaparte lived there at one point! Now, for those of you that know me, you know that this was SUPER COOL! If you don’t know me, let me explain:

2) I wrote my Masters thesis about the decline of the Venetian oligarchy, leading up to the fall of the Republic to Napoleon Bonaparte.

3) I dedicated the final chapter of said thesis to the shift of the nobility from a merchant class to a feudal nobility.

4) A large portion of that chapter discussed the buying-up of land on the terra firma and the adoption of the mezzadria (sharecropping) system.

So, guess what I saw today? An actual place where all of this took place! I was kicking myself the entire time because I know writing my thesis would have been a hell of a (helluva?) lot easier and more stimulating, had I been able to see this last summer when I was researching via Inter Library Loan and Google…>__<

They were setting up for some kind of food festival at Villa Manin and renovating the main estate, but we got to go into two small museums (one for weapons and one for carriages) and then into the back garden.

A French designer, who modeled it after Versailles, created the garden in 1714. There was a beautiful pond (it was crystal-blue and so clear), statutes and all kids of trees. I also heard a beehive for the first time…it was a little scary! The villa and garden would be a great filming location for any of you cinematographers out there. 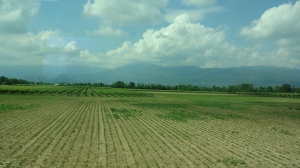 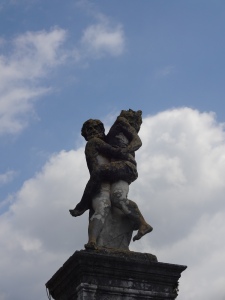 Walking around the estate and the gardens is free, but if you want to enter the museum in the main house, you have to pay (8-10 Euros) or get a Friuli-Venezia Giulia Card. Just like the Firenze Card, the region of Friuli-Venezia Giulia has a card that provides access to museums, WiFi, and public transport!

After Villa Manin, we went to Aquileia, which was a prominent Roman city and the point of origin for many of the original inhabitants of Venice. We saw the basilica and baptistery of Santa Maria Assunta and passed many ancient ruins. I also mentioned Aquileia in the first chapter of my thesis. So, I basically got to tour the places I wrote about at the beginning and end of my thesis and beginning on Sunday I will be in Venice and get to see all of the places I wrote about in the body of my thesis! So exciting! #historygasm 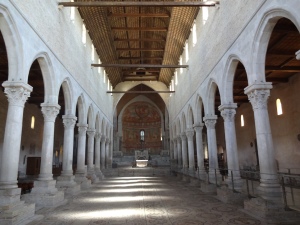 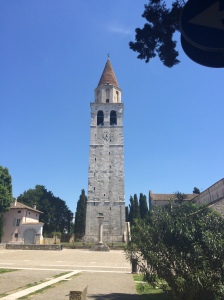 After having a short tour of Aquileia, my friend’s dad drove us to Grado and dropped us off. Grado is on the ocean and if you didn’t know, the ocean is my favorite place. Other than dipping my toes in the Mediterranean in Cinque Terre, I haven’t been to the ocean since August 2011!  In Grado, we got to have some seafood (spaghetti with clams), play in the water (got some epic GoPro footage I will share eventually), get some sun, explore, and do a little shopping (I got some cute stuff: two scarves, some earrings, and a scarf clip to match). 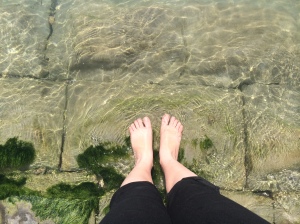 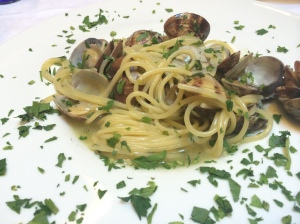 On the way back to Codroipo we stopped in Palmanova, a huge fortress in the shape of a 9-point star. If you stand in the exact center of the fortress, the three gates leading out of the town are exactly 120 degrees apart on three on points of the star. It was cool! On the way out, we drove through one of the gates and it had two layers and all kinds of gears and mechanisms, which the inhabitants used to seal up the walls during attack.

After all of that, we made it back to Codroipo. We bought a gelato and walked around the city to do a bit more shopping. We missed the bus to Udine, but thankfully my friend’s aunt drove by and she was able to contact her dad to pick us up.

We got back to my friend’s house around 7 and we had dinner (prosciutto, Prosecco, mozzarella, crackers, and tomatoes) and then dessert (pineapple)!

Throughout the day I also got to talk to my friend’s dad about politics in Europe, the U.S., and South America (her family migrated to Venezuela during the Depression era and only came back to Italy a few years ago), which was SO much fun. I love talking to people about their political beliefs, and specifically how their thoughts on economics shape their political beliefs!

Now, I have yet to get to the most awesome part. It turns out Friuli-Venezia Giulia is one of only 3 autonomous regions in Italy and THEY HAVE THEIR OWN LANGUAGE (one could argue that it’s a dialect, but whatever). Also, since elections are coming up, I got to see all kinds of campaign posters and even passed a campaign office for Lega Nord, a political party which advocates some isolationist and separatist ideas. Why is this cool? Well, I am a total sucker for languages and dialects and have been since I was a kid. I collect dictionaries and phrasebooks, if that gives you any indication of my obsession. Of course, the more obscure a language, the better! For my Ph.D., I really want to study the history of regionalist politics in Europe and specifically Italy. Everyone studies Irish and Spanish regionalism/separatism-and that is fascinating, do not get me wrong-but Italy is unique and so I want to study its political history!

So, to recap: I got to explore multiple settings from my thesis, I got to go to the ocean, I got to shop, I got to eat good food, I discovered a new language, I got to talk about contemporary global politics all day, I got to explore an autonomous region in Italy…it was literally PERFECT!

Before my brain explodes, I have to go.

7 thoughts on “Italia in 40: Day 9…#Historygasms and the Sea=My Perfect Day”