Today was a chill day.

I had plans, but it took a few hours to get my blog unlocked and by the time I showered and did my makeup, it started storming.

After getting ready I saw that there was a laundry service at my hotel, so I went and asked and they said it was 10 Euros and took two days. I knew that I had successfully washed my clothes in Florence for 10 Euros, in 2 hours, so I thought I could go out and find a place to do it myself…boy was I wrong.

I looked up laundromats on Google and found Self-Laundry. I started walking and made my way to the location using Google Maps. It was about 25 minutes away from my hotel, but it was no where to be found. I don’t know if it closed or if it was mislabeled on Google Maps, but either way I couldn’t find it. I used my iPhone GPS and it directed me to another laundromat. There were lots of Americans and Australian tourists there, so I decided to stop. I put my clothes in a machine and went to this wall unit where you paid and got soap. It was 9 Euros to wash a load+1 Euro for soap. I didn’t think much about it because it was 10 Euros in Florence so I was right on track. 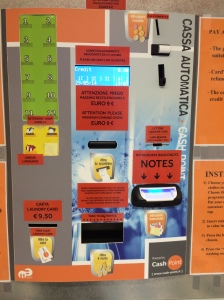 So, here are some tips:

I started a load and went to look for food. I couldn’t find anything, but there was a cafe next to the laundromat.

All of the bars/cafes here in Italy offer some kind of food. Usually there are little fried foods, sandwiches, sweets, and pizza. Usually they are displayed in a glass case and you pick what you want and they will heat it up for you if you want. Most places offer to-go options as well. My problem with this: I don’t know if they make X amount and then just keep it in the case until they sell it or if they throw it out every night and start from scratch. I am 99% sure that they make a certain amount and then just leave it in those cases until they sell it. I never eat the sandwiches because they have mayonnaise on them and aren’t refrigerated. I always get the fried treats or pizza.

I had some large hash-rounds, a croquette filled with mozzarella, and some stuffed olives! It wasn’t very good…at all.

There was also this annoying little boy and his dad that were dominating the cafe, so after I finished eating I went next door to watch my clothes.

I switched my clothes to the dryer and had to pay 9 more Euros to dry them for 30 minutes.

After they finished I walked back toward my hotel and stumbled upon a Scuola. These were confraternities in Venice that were devoted to specific religious causes. Rich and poor men were part of them, so they helped enfranchise those that had no political agency in Venice and connected the classes outside of the government and economy. 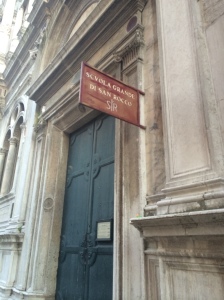 I got back to the San Samuele area and got some gelato and then stopped at another “tapas” bar and got some snacks for dinner: sardines, calamari, and some minced meat balls. I got mad because I asked for the veggie balls and for my food to be heated (in Italian) and neither of those things happened. The sardines were SO good and the calamari was delicious, but I could have done without the cold meat balls. 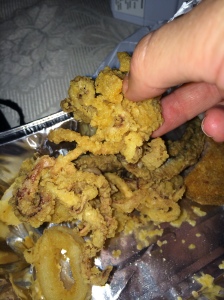 Tomorrow, if it doesn’t rain all day, I am going to Burano. Saturday I am probably going to Vicenza and then Sunday I want to go to mass somewhere! 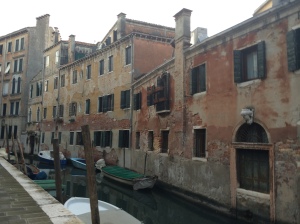 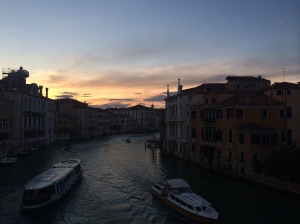 I will talk to y’all tomorrow! 🙂