Today was a VERY uneventful day! I slept all day…I was so tired and sore and just beat.

I got ready and walked up to the center of the city and went to this pizza place I’ve gone to every time I’ve been to Assisi. Unfortunately it’s been remodeled or come under new ownership so it wasn’t that good. I got my standard piece of pizza and a beer (the pizza was really just rosemary focaccia bread). I sat down on a some steps and ate my pizza. This guy came up to me and started talking to me. He was in his last 40s or early 50s and didn’t speak much English and knew nothing about the U.S. (he didn’t know if Texas was in the north or south and asked if Dallas had a beach). We spoke Italian and English and talked about this concert that was going to be in Assisi on Saturday, where my next destination was, how long I’d been in Italy. He wasn’t creepy so it was nice to talk to someone that was not weird and genuinely cool!

After we finished talking I walked into the Tempio di Minerva right across the street. It was SO hot out today, so going into the church was nice because it’s so cool in there. I took pictures and walked around and then left to walk further up the hill.

I walked to Assisi Cathedral which is dedicated to San Rufino. I took some pictures and went into a little art exhibit dedicated to John Paul II. After that, I went into the side chapel and there were a couple of nuns in there and some old people. I decided I would stay and recite the rosary, but just about that time the nuns began reciting the rosary and lots of old people came in. I don’t know the prayers in Italian, but I could tell which was which, so I was able to go through the rosary with them, just saying the prayers in English in my head. I think they were about to start mass, so I left and walked back down the hill.

Only my way down the hill there was a little section of road blocked off with a plaque that said it was a basalt road from the 1st century BC! I tripped and fell and a bunch of people saw me, so that was fun. My ankle hurts now, haha… 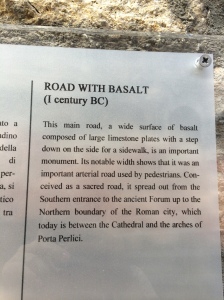 I got some gelato and water and just sat and watched people for a while. When I walked back down to main square and my conversation partner was still there, but I didn’t make eye contact as to avoid an awkward second encounter. It was about 6, so I decided to walk down to St. Francis’ Basilica. I went in, but the tomb where I always go to pray when I’m here was closed because it was late. RAI was already setting up for Saturday’s concert, so the entire piazza below the Basilica was filled with people setting up the stage and sound equipment. All of that stuff really messed up the view and so that kind of stinks, but I’m still glad to be here, of course!

After leaving the Basilica I walked back toward my hotel and got a small personal pizza and some drinks from the little cafe I went to last night and then went back to my hotel.

Tomorrow should be a little better. I plan to wake up before noon (HA!) and walk up to the top of the hill. I’ve never been to the top of the hill and I think there is a fortress or castle up there. I am also going to check out the museum in the city center because there are Roman ruins inside!

Sorry today was so uneventful! 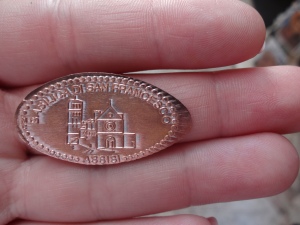