So, it freaking stormed HARD again all day. It got so windy and was lightening so hard that the owner of the place had to come into my room and use a special tool to let the awning down over my balcony and she showed me how to latch the shutters.

I tried to wait until it stopped raining to go do something, but it kept on and on. I only have a shitty umbrella from Walgreen’s and a thin sweatshirt form Old Navy. I don’t have a jacket or shoes or a good umbrella, so I’m kind of at the mercy of the weather, unfortunately. The forecast says it’s going to rain all week, which sucks. I didn’t plan on going to any of the tourist attractions because I’ve been to them all-several times, but it still sucks that the weather won’t be nice.

I have found several shops I want to go to and I wanted to try to go to the movies and maybe take a day trip to Anzio. I am going to try to go back to Alcott and buy the clothes that I found in Naples that I wanted: These shorts (in khaki) and this shirt (in a different color scheme). I wouldn’t ever wear them together, but I loved both prints!

The rain finally stopped around 6:30 so I made a break for it, hoping to get downtown before it started up again. I took the subway down to the Spanish Steps and then walked around and made my way to Via del Corso. I walked all the way down it and ended up at Piazza del Popolo. I don’t know why, but it is SO much easier for me to navigate here. I’ve written about how easy it was for me to navigate in Venice, but today was really easy too. Leaving form the Spagna stop and walking to Via del Corso. I wound up back at the place I went to eat pizza and watch soccer with my friend the other night. I was shocked at how close the subway stops were and that I knew exactly where I was. I walked around that area and explored. I found a cool book store that only sold maritime themed books! I walked past a church, a hospital, and some awesome graffiti, before heading back toward the Spanish steps. 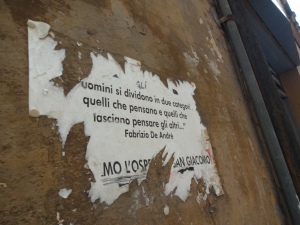 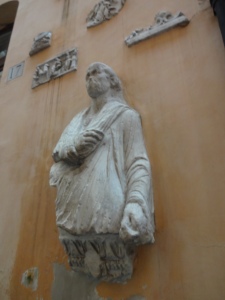 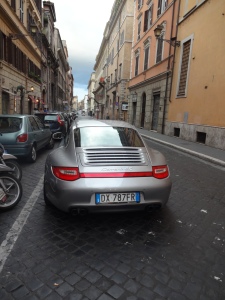 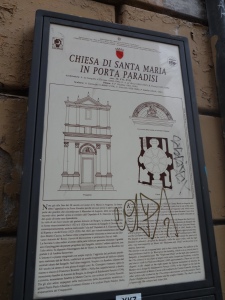 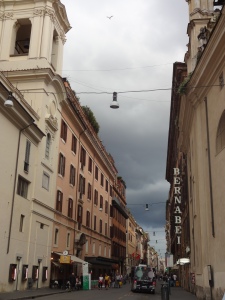 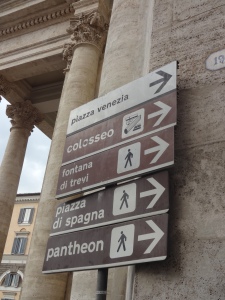 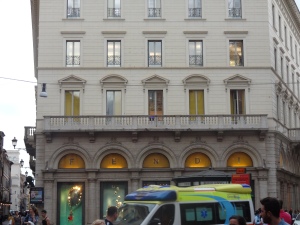 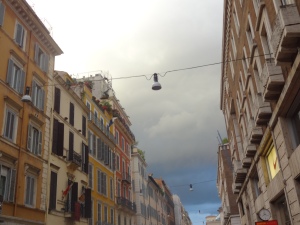 On my way toward Via del Corso I passed several restaurants, so I went back and ate at Numbs. It was really delicious and although the service was typically Italian (no “get up and go” so to speak), I loved the atmosphere. Thankfully, just as I sat down it started POURING again. The restaurant filled up quickly, but I was in a corner table for one, so it was an awesome spot to watch people. I got a bruschetta for an appetizer, caccio e peppe for my meal (which is similar to an alfredo sauce, but lighter and with black pepper), and a glass of Sicilian red wine. They brought bread, which means I had to pay a seating charge. All together my meal was 22 Euros. It was really enjoyable and the atmosphere was nice and the staff was pretty friendly as well. 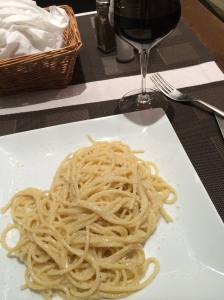 While I was there, people kept ducking under the restaurants awning to escape the rain. This mother and son ducked under the covering and they had paper bags and one ripped, so they just combined them and then threw the trash from the other one on the ground. One of the waitresses GOT ON THAT ASS. I saw the whole thing and was laughing and she knew I saw what happened so she was nice to me.

After dinner I wanted to get a coffee or an ice cream, but it was already 9:30 and I couldn’t remember what time the subways shut down during the week and I was far from my apartment building, so just went ahead and left downtown. I stopped and bought some postcards at this souvenir stand, took some pictures of the Spanish steps since they were practically empty, and then went to get on the subway. There was a cool performer in the subway and he was playing 50s music and had a sign in his guitar case that said “Give me money to fix my time machine, I need to go back to the 50s.” I was so impressed, I gave him some coins. 😛 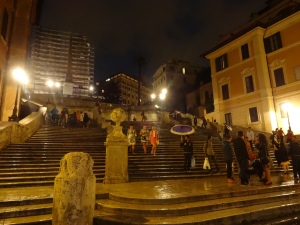 When I got on the subway and sat down, this Bangladeshi man sat down next to me and he looked familiar, but I didn’t really worry about it. He started talking to me and it turns out he was the guy that sold me my postcards. He remembered exactly what I bought, it was funny. He asked me if I lived here or if I was visiting, where I was staying, and how long I was in town, but I was just really vague. I am 97% sure he was high or really sleep deprived (or both), but he was nice. His name was Mohammad. I feel so bad for the migrants that sell stuff on the streets. All I can think is how bad their lives must have been in their home countries that they were willing to move to Italy and sell mass produced goods for such low wages. They are EVERYWHERE in Italy-north, south, east, and west. I always wonder where they live and what they eat and how they got to Italy and why they chose one particular country and city. They usually sell little novelties on the streets like laser pointers or these jelly toys, but when it rains they have umbrellas and they also sell roses at night around major tourist attractions and restaurants. I have seen several of them yell, quite loudly, at people when they won’t buy their products-which scares me. I really, really want to make a documentary about them and about the gypsies. I imagine they live commune style and share their wages because there is no way they make enough off of the 2 Euro umbrellas and novelties to survive in Italy. I feel bad when I see men that have had to swallow their pride and do jobs that they may be over qualified for, just to make a little money. It also worries me because all of these men are visible and out selling stuff on the streets, which makes me think there are equally as many women in the factories and brothels of Europe, being exploited just the same…

After I got back to Ponte Lungo I walked down a bit to see if I could find somewhere to buy a coffee or ice cream, but everything was closed, so I just came back up to my room.

I wish I could say that I am going to go do something cool tomorrow, but it’s already started storming again, so I really don’t know what my plans are. I would like to go explore the other side of the river, but we’ll see…