I’m sure you’ve gathered by now that nothing in New York City is simple.

What I thought was a 4 day search that ended in 3 possible apartments, quickly turned in to a 3 week saga and many angry phone calls.

After my awesome day of seeing 7 apartments and applying for 3, I hit a brick wall. I can’t say why, but I do believe that the agent I was passed off to in Riverdale was not a proactive as he could have been.

With $1200 cash in his pocket and all of the required paperwork from my cosigner/guarantor and I, I don’t understand why all 7 apartments fell through.

He didn’t contact me for days and despite many texts and calls from me, I didn’t find out until the middle of the following week that I hadn’t gotten my dream apartment and the 3rd apartment in my queue was already rented. By the end of the second week, I thought I was only waiting on the second apartment. One of the other apartments I saw was still available, but it was my last-ditch option. I saw the second apartment I was waiting on listed online and I got my mom to call and ask about it and it turns out it was rented. So, after all of that previous work, two weeks later and I was literally at square one.

I panicked and started cruising site after site to find anything and everything.

I applied to a Christian dorm at the NYSUM in Queens (I highly suggest applying if you are moving to NYC-it’s only $5000 a year). I never heard back from them, but I do think it’s a good option, so check it out!

I looked on ACME Listings and found several other listings and my mom found a guy online that was renting out a room in his apartment. I called my agent at Rapid Riverdale and told him that my cosigner and I were coming back to the city and we were ready to look at as many apartments as possible and sign leases ASAP.

My mother and I rented a car, packed it up, and drove to New Jersey.

The next morning we woke up at the crack of dawn and took the train in to New York. I had set up an appointment with another real estate agent, but the train to New York was stuck on the track for over an hour and I missed my appointment. We made our way to Rapid Riverdale and my agent took us to see an apartment. It was in Riverdale, but far from the train and $100 over my new budget and $300 to $400 over my original budget. We went back to the office to wait for another agent to take us to a few other viewings and there were signs on the front of the office advertising one bedrooms for under $1200 a month. I asked my agent and he acted as though he knew nothing about it, but asked another agent named Serin!

Serin rocked! He came into the room where my mother and I were waiting. By this time I was pissed that my agent had let 7 places slip away and that I had to find listings for us to go see, when I was paying HIM a broker fee. So, I just spoke up and told Serin that I would take anything under $1200 that I could move into immediately. Serin took my mother and I to look at a huge place in the Bronx. It was a one bedroom that could be two, in a Dominican neighborhood, and was $1175 a month. We went to see two others and I told them to put my application in for 3 of the 4 apartments we saw (we saw a janky one near Yankee Stadium). My mom was NOT happy with any of them, except the one in Riverdale, and was especially not happy about me living in the Bronx alone.

We left their office and headed over to Inwood, as we had an appointment with a man she met online that was renting out a room in his apartment. The Inwood area was SO nice and every building had a number on the outside to call for rental information. On our way to this gentleman’s apartment we called 3 places and ended up getting in touch with an agent named John Suarez. He was a Manhattan broker (Inwood is on the island) and told us we could go look at two apartments that night!

My mom and I went to meet with the guy renting out the room and it turns out he wanted us to take over his lease for $1750 a month. He would sleep in the living room, I would get the bedroom and we would share a bathroom. He would pay me half of the rent on the 4th of every month.  His current roommate was former Army from Fort Hood and he was getting married and moving out at the end of the month. While it was a nice area, the rent was too high for my budget and having a roommate for $1750 a month was just a little much considering I could find a place alone for under $1200.

After leaving that meeting, we went to see the two apartments Mr. Suarez had listed and my mom and I fell in love with a one bedroom right off of Seaman Avenue in Inwood. My mom was happy with it because it was in a safe area, so she agreed to help me with rent since it was over my budget by a couple hundred dollars a month.

The next day Rapid Riverdale said that I got the apartment in the Bronx, but at the same time we were supposed to meet with John to apply for the two Inwood places we saw the previous night. My mom was set on Inwood and I wanted to take the Bronx unit since it was cheaper and ready for immediate move-in.

So, my mom and I were in a stalemate. She hated the Bronx because it’s dangerous and she loved Inwood, but the rent was way outside my budget. We’ve fought on and off for the past 3 years because I’ve lived at home and really, really had trouble making friends. She would often tell me that she believed the reason I couldn’t make friends is because no one my age can relate to me: single, childless, lives at home, a student, works 9 months of the year, travels…

I have always wanted to move to NYC, but I didn’t have anything to push me past the fear that kept me living under my parent’s roof where I was safe and insulated from failure. When I got into NYU I took that as a sign that I now had a reason to go out on a limb and try this whole being an adult thing. So I did it.

I didn’t like the idea of moving to New York City and using my parent’s money to pay my rent. I wanted to live somewhere that, although more dangerous, was within my budget and I could manage on my own. I want to be independent.

I completely understand that the privilege of having my parents pay part of my rent is something that very few others have and that it should be met with utter gratitude, which it was. But since living at home has kept me from making friends for so long and so many people throughout my life have ostracized me and been mean to me because they were under the impression that I was a “spoiled only child,” I wanted to make sure that wasn’t the case in New York.

I’m twenty five and the time has come that I need to depend on myself and myself alone. I am already dependent on my mom as a cosigner/guarantor since I am not yet employed in New York.

Despite this explanation, my mom didn’t understand my point of view and this digressed into a screaming, crying argument in the middle of a subway station in Inwood and progressed into a one and a half day argument. We yelled and screamed and cried and discovered we have severe problems with communication. Childhood issues surfaced and we both said things that probably irreparably damaged our relationship.

After a few hours of fighting and my mom insisting she wanted to help and it wouldn’t be a burden, I agreed to move to Inwood and we met with the agent. But after applying for the place he revealed that the lease was $1350 a month for two years or $1450 a month for one year! I freaked outtt. The fight that was solved 45 minutes before, erupted again and led to yet another crying fight walking through the projects in Harlem. The fight continued on into the night and I even mentioned deferring my enrollment at NYU. All hell broke loose at this point.

I was finally able to get my point across about being independent and the fact that $1350 or $1450 as a single, 25 year old student was just out of my reach. I love Inwood and will DEFINITELY move there the MINUTE I find a career and pay off my student debt, but as of right now, the Bronx apartment was just a better fit, despite the dangers.

We called Rapid Riverdale on Saturday and planned to meet them Monday morning to sign the lease for the Bronx place.

SN: If you are looking for an apartment in any part of the Bronx, contact me and I will give you Serin’s number/email. He is a rockstar and will work with any income level or credit level!

Thankfully, I had already paid the broker fee two weeks earlier,  so Sunday I had to roam around New Jersey and find a way to get $2350 cash and convert it to money orders. This included a 45 minute visit to a 7 Eleven with thousands in my purse and my poor mom sitting in the parking lot, frantically worried that we were going to be killed, only for the money order machine to be broken. We finally found a Rite Aid that would sell me $2350 in money orders and Monday morning we drove to Harrison, New York and met Serin at the property owner’s office. We took about 35 minutes to sign the lease (leases are NUTS in NY-all the bureaucracy means they are like 30 pages of initialing and signing!) and that was that.

I really like the place I picked, despite my mother’s reservations. It’s 10 yards from a deli, pizza place, liquor store, and fruit/veggie cart. It is under the second budget I set. Heat and hot water are included and it’s big enough to take in a roommate if things get tight. It’s a basement apartment, very close to the laundry room so that’s another plus. It’s .3 miles from two separate subway stations so that’s good for winter. It’s a block or so away from several other subway stations and other businesses and food joints. I won’t lie and say I’m not scared; I don’t want people to get mad at me since I’m not part of the community and have a southern accent. But I think it will be alright. Everyone I’ve met has been really nice so far and my super is really nice too! 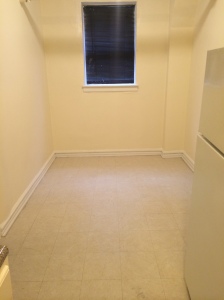 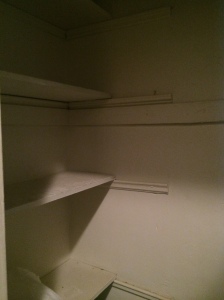 After signing the lease and moving all of my things into the apartment, I called and got rental insurance and then my mom and I drove back to Dallas…

I’ve set up my electricity and have an appointment to get my wifi set up on Thursday. I will be back in NYC Tuesday afternoon, so stay tuned for more! The next adventures will include cleaning this entire apartment, my first day of class at NYU on Wednesday, buying furniture, putting said furniture together, and grocery shopping in the barrio!