As you can see I haven’t written in a month, but I have a good excuse: I found a job!

If you are looking for quick employment (in New York or otherwise), I highly suggest Care.com! It isn’t just babysitting. You can apply as a turtor, personal assistant, elder care specialist, or for babysitting! I was able to find a permanent position pretty close to where I live.

I’m also tutoring online, so if you or anyone you know needs help with school work (kindergarten through college), check out my site and schedule a virtual tutoring session!

Now that all that advertising is out of the way, I can get down to the nitty-gritty.

I have another recipe to share and some recommendations for a few places around NYC if you are planning on moving or visiting!

First and foremost, I want to tell you guys about Mother’s Bake Shop! The lady I work for took me there right after Yom Kippur to buy some Challah bread, but I went back by myself a week later and am now obsessed. This place has EVERYTHING.

If you watched the recent Anthony Bourdain: Part’s Unknown episode in the Bronx, he went to a deli in Spuyten Duyvil, Bronx…this bakery is right next door.

It’s a Jewish bakery, but they also sell all different kinds of European and American desserts. Cannolis, cheesecake, baklava, cupcakes, cookies, etc. and it’s extremely reasonable. I visited with a friend and we got a piece of cheesecake, a coffee, and a box of mixed desserts for $14!

I personally recommend the Almond Horseshoes!

END_OF_DOCUMENT_TOKEN_TO_BE_REPLACED

Hey everyone! How have you all been? I am sure you are all wondering why I never started my New York blog series. I know it has been almost 3 weeks since I made the announcement and I have yet to post the first installment. Well, long story short, it is a major pain in the ass to move to New York City. Ignorantly, I had these ideas about 19 year olds from the Midwest that just up and move to New York and automatically find a one room studio for $800 a month and just work day and night to move up to a one bedroom whenever they’ve saved enough money.

Let me just say, if you are thinking about this little fantasy too, THAT IS NOT HOW IT WORKS.

Reality smacked me in the face quite quickly. About a month ago, I went up to Massachusetts with my boyfriend. He has a timeshare up there and we figured we could just take the train into the city everyday and find something quickly. I had been looking on Zillow.com and Trulia.com for a few weeks, but everyone that I called or emailed said to call them when I got to the city because the listings that were available would be gone by the time I got there. I later found out that the average listing is only available for 48 hours, so you have to jump on them immediately and submit an application.

I found one realtor online that worked in Brooklyn (from what I understand the real estate licenses in the city are only good for one borough, so most agents stick to one borough). She called me about a week before I was due to arrive and I gave her my budget and the areas I wanted to live. At this time, I had this fantasy in my mind that I would be able to find a studio for $900, so I said that my budget was $1000 a month. I did not have any other requirements. As I am not moving my furniture, I did not care about square footage or anything. This agent told me to contact her when I got to New York, so on the ride up to Massachusetts I called her and we talked for about 45 minutes. She said she would look and call me back the next morning.

I found out through research that if you are not employed in New York City, you have to have a cosigner from the tri-state area. If you call people and tell them you are a student and you have cash for the lease (which I did), they still won’t show you the listing because most places require you to have a minimum income of 40 times the rent. i.e. A studio for $1000 a month means you have to make $40,000 at a job in New York.

END_OF_DOCUMENT_TOKEN_TO_BE_REPLACED

Today I woke up and took my laundry to a place right down the street. It said “self service” on the window, but I went in and some lady came in and collected my money and put the soap in. It was 8 Euros for soap and to wash and dry one load! I couldn’t believe it. While I know that you can live anywhere on a budget, I really don’t understand how most people afford to live in Europe. If you just lived a comfortable life, you would have to make at least $100,000 a year and that’s if you didn’t have kids. Most of the restaurants I’ve seen, if you got a full Italian style meal (appetizer, first and second course, dessert, and a drink) it would be 50 Euros per person. Not to mention bills like gas, electric, water, rent, clothes, transportation, and food. I would really love to know how people afford it…if you know, please leave a comment below!

While waiting on my laundry, I decided to have lunch at a restaurant. I haven’t been to a restaurant since I’ve been here because I’m trying not to spend a lot of money, but I wanted to eat at one today. I got two beers and a plate of pasta in olive oil and it was 23 Euros. Something you should know if you come to Italy (and probably other places in Europe) is that most places charge a fee to sit and eat. If you are just drinking they usually won’t charge you or it will be less, but if you are eating there is a small fee. My food and beer were delicious and the weather was nice though! I was in a carbohydrate induced coma, so I went back to my room and took a short nap before I went and got my laundry. 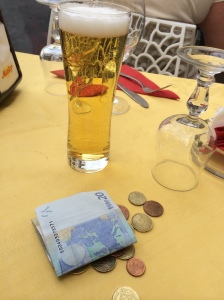 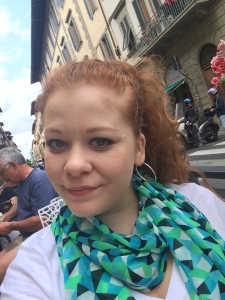 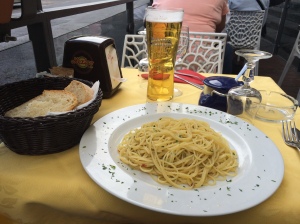 I came back to the hostel and folded and put everything away, laid my outfit out for tomorrow, straightened up my bag, and got everything ready to pack tomorrow, then decided to go back across the river since that’s my favorite spot. 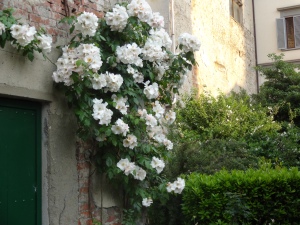 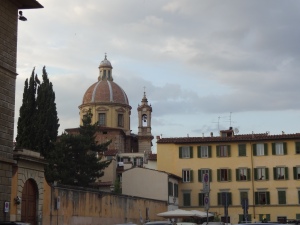 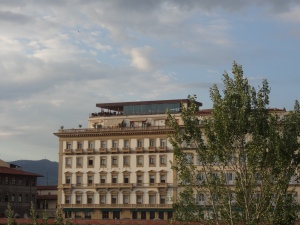 I had the best gelato I have ever had in Italy. I know there is a lot of debate about this hot topic, but I definitely suggest visiting Gelateria La Carraia, if you are ever in Florence.It is conveniently located right by the Ponte alla Carraia, so you can chill on the bridge and watch the river and people. 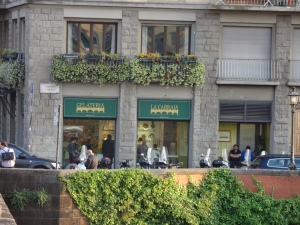 I decided I’d watch the sunset, but then I remembered I had all of my cameras in my bag, so I filmed it! It was so beautiful. 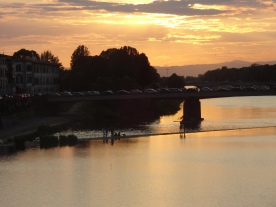 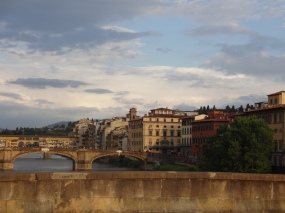 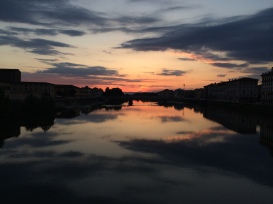 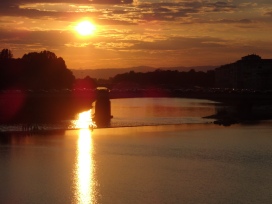 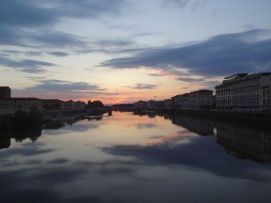 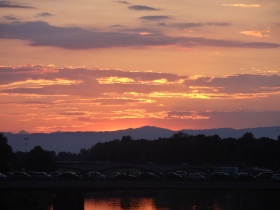 After leaving the river, I figured I should pick something up for dinner since I hadn’t eaten since 2ish and I didn’t want to go to my room only having had gelato. I went back to my store (it’s called Uno Rosso and here is the link to their Yelp page). On the way there some dumb boy on his bike kept riding around me and trying to spray me with something in this aerosol bottle…it smelled like cologne, but I wasn’t sure and I didn’t want him to spray me in the eyes and try to take my purse or something, so I yelled at him. There is a one block area by my hostel (Via della Scala/Via dell’Albero/Via Palazzuolo/Via Canacci) that is the Muslim area and during the day it’s been fine for me, but the other night I heard some guy yell at this American girl that was walking by about Obama and war and tonight I sensed some hostility and heard a few hisses (I assume because I was over there after dark), so yeah, just be careful. I might go walk over there tomorrow and take some pictures during the day. Once I made it to my store, I got a salad, but he only charged me .90 cents for it because it wasn’t super fresh since it was late, and a bottle of wine and some water and went back to my room. 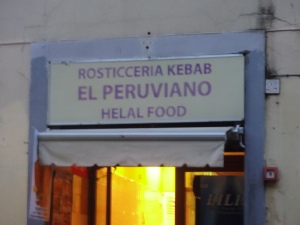 SN: There are some awesome Arab markets that are worth checking out on Via Palazzuolo and the area may be larger than a block, but that is the only part I’ve explored.

It’s Saturday night so the street by my room is so busy. There is a pub called Joshua Tree that I can see from my room and it looks so fun. My hair is still wet or I would have tried it out tonight. That’s one of the only things that sucks about being a female, solo traveler…I don’t really feel safe going out to drink or dance at night. I’ve already seen a group of American kids pass by and two guys get into a fight in Arabic, so I’m sure tonight will be action packed.

I want to get up and go to Mass tomorrow, but a lot of the churches have signs that say tourist aren’t allowed and I also don’t have a dress that is church appropriate, so we’ll see! If I don’t go to Mass, then who knows what I’ll do tomorrow. I want to do something fun since it’s my last day in Florence, but I’ve been to all of the museums (except the Accademia) and my Firenze card has expired. I might try to go back to the Jewish museum and synagogue because I saw a really good Kosher, vegetarian restaurant that I wanted to try or I might check out some other gardens.

Anyway, I will talk to y’all tomorrow! 🙂